It feels like forever since the last time I blogged, but there has just been so much activity happening here on the ground that it is hard to find time to sit down and write. And the more time that goes by, the more overwhelming the idea of putting pen to paper (or fingers to keys, I suppose) becomes. But here I go….

Having been here for six weeks and attempted to travel to all 10 kitchens on my own at least once, it has become blatantly obvious that this is neither a feasible nor safe research strategy for me to pursue. Some kitchens are upwards of an hour away from Isamilo (the area where I live and where the APYN office is located) and many are also located in such remote, rural locations that pikipiki drivers have often never heard of them or know the first thing about how to get there. Two weeks ago I decided to go to Mahina kitchen in order to meet some more of the kitchen members and deliver a large banner that Western Heads East had sent over for each kitchen. I felt confident I could get there on my own since had been to Mahina before with my former roommate and fellow intern, Emily, and because my pikipiki driver claimed enthusiastically to know it’s location. In hindsight his enthusiasm was surely just a ploy to get the job because after a full hour of driving along deserted dirt roads, asking locals for directions, we ended up in a completely different area of Mwanza. At this point, I resorted to calling Esther (APYN’s Community Program Director) for help, and she was more than happy to talk to my pikipiki driver and direct him to drop me off at the nearest kitchen, Tumiani. When we arrived in the area, Esther had sent one of the mamas, Agnes, to look for me- I am not hard to spot, even in a crowded marketplace.

My pikipiki driver tried to charge me 7,000tsh for what should have been a 1000tsh trip to Mahina kitchen from national dala stop where I began, despite that he had completely failed to get me where I wanted to go! Almost without thinking I laughed and blurted out: “Mimi si kulipa elfu saba! Wewe sema wewe jua wapi ni Mahina jiiko. Wewe sema wewe chukue mimi kuna, na wewe wala!”, which roughly translates to: I will not pay you 7,000. You said you knew where Mahina kitchen is. You said you would take me there, and you didn’t! I am not sure if the driver, Agnes or I was more surprised when the words flew out of my mouth in Swahili. For a moment all three of us sat in stunned silence. Then the driver smiled, said something about “Mzungo sema Kiswahili” and we all laughed. Despite that he had lied about knowing where the kitchen was and consequently wasted an hour of my time, I gave him 2,500tsh because his time and gas were wasted too. He seemed pleased enough with the negotiation as well.

The whole experience left me feeling exhausted, frustrated and rather out of control. I have not attempted to return to Mahina kitchen since, nor four others that are located in particularly distant or rural areas.

The difficulty and potential danger of getting around on my own (let alone with my translator in toe as of April) lead me to question whether my study should solely focus on a few of the most easily accessible kitchens. I would say that of the 10 kitchens in the APYN network, I can comfortably and confidently make it to 5 of them on a regular basis: Tukwamuane, VSI, Buswelu, Ebeneza and Sayuni. Fortunately these kitchens vary in size, organizational composition, profitability, lifespan, district, in the types of additional community programming they facilitate, etc. Their diversity will still therefore provide an interesting basis for comparison.

At first the decision to reduce the number of kitchen in my study by half caused me a lot of anxiety. I knew that my research agenda would need to be adapted once I was on the ground, but this was a significant reduction to the scope of my study. Fortunately, I have an extremely supportive and experienced group of individuals on my thesis committee, who each reassured me that making breadth versus depth choices in fieldwork and learning to justify them are part of the research process.

Moving on, I recently met with my friend and colleague, Maimuna Kanyamala, who is the Executive Director of Mikono Yetu, a women’s economic empowerment organization in Mwanza. She informed me that Mikono Yetu is just weeks away from administering a questionnaire very similar to my own regarding women’s access to and control over resources in the Lake Zone (this is the area surrounding Lake Victoria, of which Mwanza is one of 4 regions, alongside Mara, Kagera and Shinyanga). They are aiming to have hundreds of women participate and once published, this research should serve as a great basis for comparing women’s access to and control over resources in the general population the Lake Zone, with that of the APYN kitchen members. Maiumuna stated that she was just as interested in viewing the results of my questionnaire as I was hers- which I found hugely flattering! We agreed to share our data with one another as soon as it is compiled.

My search for up-to-date research on the status of women in the Lake Zone has also been surprisingly fruitful. I have made local contacts at six different organizations in Mwanza, and already gotten my hands on upwards of ten fairly substantial studies examining women’s social and economic empowerment, gender and HIV/AIDS, maternal health, domestic violence, women’s rights, etc. conducted in the region since 2009! Much like the research study being conducted by Mikono Yetu, this information will give me a baseline against which to document and demonstrate changes to women’s access to and control over resources as a result of their employment in the APYN network.

Aside from work I have been enjoying living at the house in Isamilo and have developed a rather close-knit group of girlfriends that I hang out on a regular basis. We will go out for dinner or drinks, hang out by the pool as Isamilo Lodge, or watch TV shows on our lap tops- Girls and Downton Abbey mostly. Last weekend we hosted a Momma-Q (and all girls BBQ) at the house, which was a lot of fun! We served homemade guacamole, tortillas, hamburgers, sauteed potatoes and onions, as well as hot dogs and lamb sausages. Yum! Some of the girls brought salad, more guacamole (you can never have too much guac!), cookies and a interesting concoction called “Snickers Popcorn”. 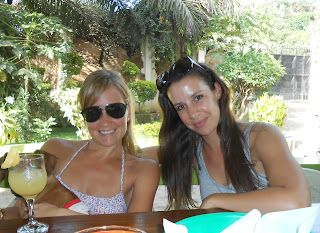 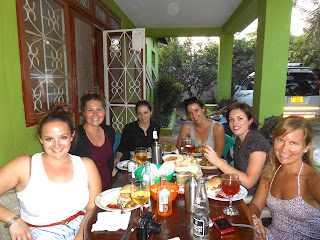 There was a bit of a learning curve to working our charcoal BBQ, but I took on the task! I thought this was really funny since I am the one who is still to nervous to light my own BBQ in Canada after a freak incident involving singed pigtails in my undergrad! 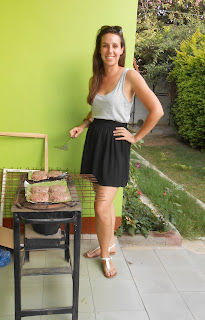 Anyways, it was delicious and a nice change from our usual dinner routine. 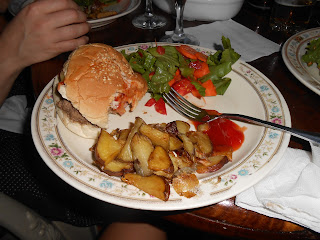 The last week in February APYN started planning the network-wide conference that I fundraised for before leaving Canada. I am excited to announce that it will be taking place March 12-14 and 19-21! I am going to write a separate blog post documenting the planning process over the next day or two.

Until then, kila la heri (all the best).